I had an interesting patient come through my door today. She was a 41-year-old mother of two, referred to me by an acupuncturist who frequently uses me when she is stumped. The initial diagnosis was TOS (thoracic outlet syndrome) with symptoms worse on the right than left due to the numbness in bilateral upper extremities. While present most of the time during the day, the numbness and tingling also appeared when she was lying down and she frequently needed to shake her arms. “My 4 year old started shaking his arms and hands just like he see’s mommy do.”
The EMGs were highly positive for carpal tunnel syndrome and the medical doctors recommended immediate surgery to decompress the carpal tunnels. If that didn’t work, they would consider resecting the 1st rib. She refused and so did her husband, a physician and neuro-radiologist.
Initial evaluation was significant for:

Treatment was begun using muscle energy techniques (as taught by my DVDs, Manuals and Seminars) for not only the articular asymmetries but also the muscle groups that were affected (pecs, traps, and scalene.) (Watch a video clip on 1st Rib treatment below) By the end of the initial treatment session, the neuro-dynamic tension signs were gone as were the trigger points in the upper traps, 1st and 3rd rib asymmetries. The patient’s husband is an Osteopathic Physician and was absolutely amazed with the outcome from the initial session.

The problem occurred after almost 2.5 years of breastfeeding, (two children less than 2 years apart) holding very large babies close to her chest and looking down at the baby many times a day.
The shoulder girdles became forward and elevated, the pecs shortened and eventually the tight scalene began elevating the 1st ribs. This made the neuro-vascular bundle take a bit of an excessive detour over the 1st rib, thus putting pressure on the nerves and blood vessels of the upper extremities. The #3 rib on the right caught expired, further stretched the pec minor across the neuro-vascular bundle as it made its way into the upper extremity on the R.
The techniques used to correct these somatic asymmetries and hypo-mobilities are all explained and demonstrated on my DVDs and in the corresponding manuals which are easier to reference while treating the patient after viewing the DVDs.
I went on to show her how to self-stretch the pecs major and minor and to begin strengthening the rhomboids, serratus anterior and lower traps to assist in holding the corrections and preventing further relapse.
As food for thought, how many times do our patients and clients come to us having had surgeries that didn’t work, only to find that the problem was not distal as in carpel tunnel, but instead more proximal as with 1st rib, scalene and tight pecs? The couple was both smart (declined the surgery) and lucky that their therapist knew where to look for the real causes and how to correct them.
The more therapists and body-workers that learn these techniques, the smarter and luckier the patients get. I have a feeling I’ll be getting some referrals from her husband who made an appointment for me to work on his herniated L4 disc.
Watch online the MET for first rib treatment here http://youtu.be/YXagQ0eTvxs. For the rest of the MET described in the case study and many more, order your DVDs from Terra Rosa.

Tom Ockler P.T. has extensive teaching experience throughout the United States, Canada, England and Australia. As a teacher, Tom has earned the nickname “The Patch Adams of Physical Therapy” due to his unique style of injecting humour into complicated subjects. He has developed teaching methods that explain very complicated subjects in easily understandable formats. His two books and DVDs Muscle Energy Technique for Lower Extremities, Pelvis, Sacrum, and Lumbar Spine and Muscle Energy Techniques for the Thoracic Spine, Ribs, Shoulder and Cervical Spine have been hailed by students as the most user-friendly and useful Muscle Energy manuals ever. 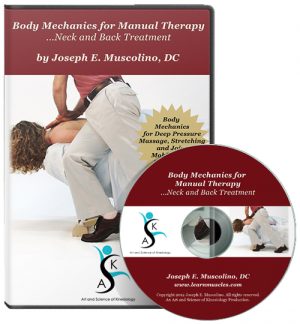 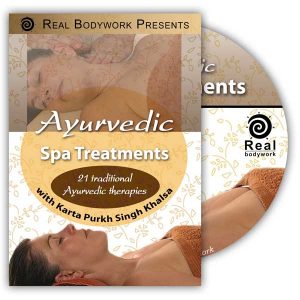 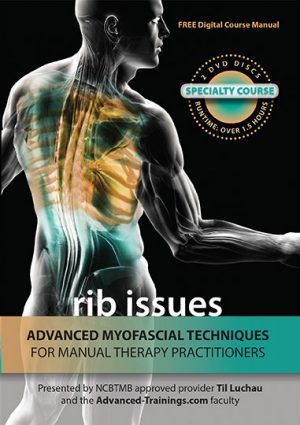